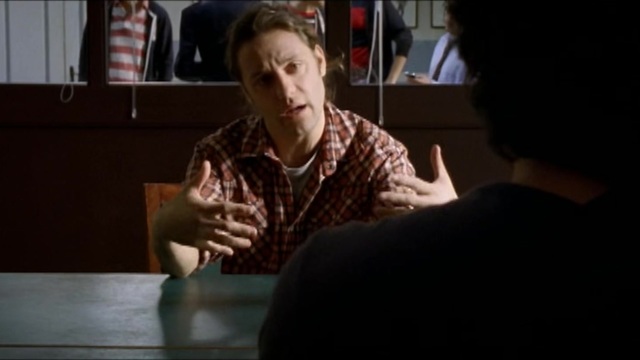 Noticing things (or not) in Italian with accorgersi

Some words are easy in Italian and some others are a little complicated. Here's a verb we use a lot but that is kind of tricky to use: accorgersi (to notice, to realize).

Let's take it apart to make some sense of it. Hint: It is reflexive, and while some verbs can be both normal and reflexive, this one is always reflexive.

In a recent episode of La Ladra, a guy wants his car taroccata (rigged) (we talked about the verb taroccare in this lesson). The mechanic tells the guy that he won't even notice he's going 300 kilometers per hour. Usually, we notice something, so very often, since accorgersi is reflexive, we have both a direct and an indirect object pronoun in the sentence. When that occurs, we have to deal with those pesky particles that can attach themselves to the verb in different ways. For more on this, have a look at these lessons.

In the following example, we can see that the verb is conjugated in the second person singular (the mechanic is talking to his customer).

With this one, you don't even notice it when you get to three hundred.

The infinitive form has the impersonal si connected to the verb — accorgersi, but when conjugated, the reflexive verb accorgersi gets separated into two parts — the root of the verb (accorgere) and the person onto whom it reflects, in this case, te (to you). Then there is an n which is a contraction of ne (of it, to it). In order to understand better how accorgersi works, we might translate it as "to become aware of." Here, there is the preposition "of."

By the time to get to three hundred [kilometers an hour], you will not even be aware of it.

"Of it" is represented by ne (in this case contracted into n').

Accorgersi in the past tense with the particle ne

In the following example, however, we have the past tense. In Italian, it's the passato prossimno formed with the auxiliary verb essere (to be) and the past participle, accorto. When you conjugate reflexive verbs in the past tense, you must use essere as your auxiliary verb.

At the end of the day, in the upper echelons of Olivetti, there's no room for anyone but a family member. I know, I noticed that. -That's it.

Me is the indirect pronoun (to me)

Ne is another indirect pronoun (of it, about it)

Accorgersi in the past tense without the particle ne

Let's look at an example without this particle ne. Here, it's not necessary because we have nulla (nothing) as an indirect object preceded by the preposition di. We have the auxiliary verb essere. The reflexive particle si is contracted and refers to the third person singular reflexive pronoun.

Look, he hadn't noticed a thing.

You made it this far, good for you! If the verb accorgersi is too difficult for you at this stage of the game, you can also use the verb notare, a nice, simple, transitive verb.

During the trip, did you notice anything strange? Think about it carefully, huh.

To say the same thing with accorgersi, it would take a few more words:

Did you notice anything strange?

Did anyone notice anything strange?

For even more about reflexive verbs, with charts. Here's a great resource.

If you do a search on Yabla with accorgere, you won't find much, nor will you find much with accorgersi. But if you search the past participle accorto (masculine), accorta (feminine), or accorti (plural), you will find numerous examples. Now that we have taken the verb and its particles apart, you can start getting a feel for this useful, but complex verb. Hopefully, picking out the verb and its accessories and then repeating them will be helpful to you.

Attenzione: There will also be some constructions we haven't covered here, such as in the following example. Suffice it to say that it involves the third person impersonal pronoun si with a reflexive verb in the passato prossimo (present perfect) tense. It's pretty advanced and a lot to absorb, and so we'll confront this in a future lesson.

When the piazza was renovated in nineteen ninety-one, they noticed that the "palombaro", that is, this large cistern, was full to the brim. 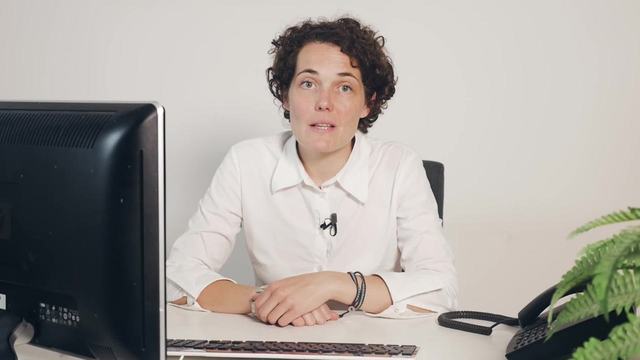 Working Things Out with Sistemare

In this week’s segment of Meraviglie, Alberto Angela uses a verb that looks familiar: sistemare. It must have something to do with "system," right?

The noun il sistema certainly exists, and is a true cognate of "the system" in English.

And so with an ingenious system for collecting water, he managed to fill a good seven cisterns that are scattered around the whole area.

A detail to remember is that although it has a typically feminine ending, sistema is a masculine noun. In English, too, “system” has any number of connotations.

So the noun sistema is fairly straightforward, but English doesn't really have a corresponding verb to go with sistemare. Sistemare might even fall into the category of untranslatable Italian verbs, although it's an easy-to-figure-out untranslatable verb. Sistemare is a general, catch-all type of verb that can mean any number of things, depending on the context.

When Alberto Angela tells us the fascinating story of a huge underground cistern in the city of Matera, what does he mean by sistemare? Good question.

When the piazza was renovated in nineteen twenty-one…

We see from the translation that the piazza was renovated, and we get this from the context of the documentary itself. But sistemare could also have referred to it being  "neatened up," "cleaned up," "put in order," "put to rights."

When you want to fix something up, make improvements, put things right, make minor repairs, put things in a certain place, make preparations, or even get your pet ready for the night, sistemare is a good verb.

In the following examples from Yabla videos, sistemare is used to mean "to work out," "to set up," and "to fix up."

Note that in the first example, the reflexive form sistemarsi is used.

I'm really sorry, Marika. And I hope everything will work out as soon as possible.

Valter always came early to set up the equipment for the students.

Now you have that impression because you're seeing it all messy, when it's fixed up, you'll see...

One general way of thinking about the verb sistemare is with "to take care of".

We can also turn sistemare into a noun: una sistemata. In English, we might use a gerund for this, as in the first example below.

You don't really want to give your kitchen a thorough cleaning at the moment, but you want it to look nice. Ci dai una sistemata (you give it a neatening up).
You ask your hairdresser, Mi dai una sistemata ai capelli (Will you give me a little trim)?

With the noun sistemata, we often use the verb dare (to give), which can also be used reflexively.

Dopo il viaggio, mi sono data una sistemata prima di presentarmi agli suoceri (after the trip I freshened up before meeting my inlaws/I gave myself a freshening up).

As you go through your day, as you take care of one problem after another, try using sistemare when you have succeeded, or when you haven't yet. Maybe you will even have fun taking care of these problems!

Questo lo devo sistemare (I have to take care of this).

Ask someone else to help you take care of something — something that needs fixing, or a situation that needs resolving.

Me lo puoi sistemare (can you take care of this for me)? 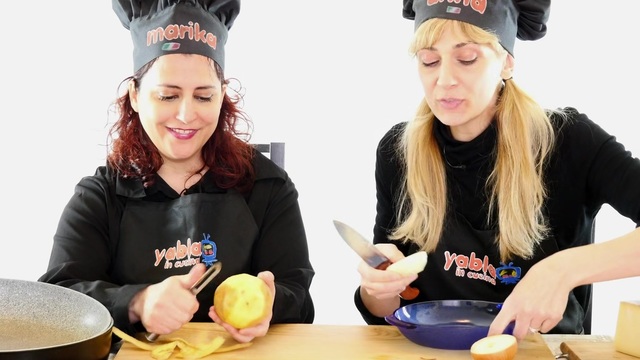 Roll up your Sleeves with Rimboccarsi le Maniche

Let's roll up our sleeves and get to work learning a new expression.

In a recent video, Marika and Anna show us how to make fricos, a local dish from northern Italy. They are made with humble ingredients, but take a bit of slicing and dicing. So Marika rolls up her sleeves. Italians use this expression both literally and figuratively, as we do in English.

In this first example, Marika is speaking literally, and uses the verb tirare (to pull). That's one way to describe the action of rolling up one's sleeves, and perhaps the easiest to pronounce.

I've already rolled up my sleeves, as you can see.

In the next example, however, the rolling up of the sleeves is figurative, and the classic expression is used:

Well, Claudio's a great guy, first of all, a true friend, and... and he's one who always knows how to roll up his sleeves [to pitch in and work hard].

Rimboccare (to tuck in, to turn) refers to the edge of something, like a sleeve, a hem, or a sheet, but it's very commonly used in the above-mentioned expression, especially when acknowledging a long job ahead. 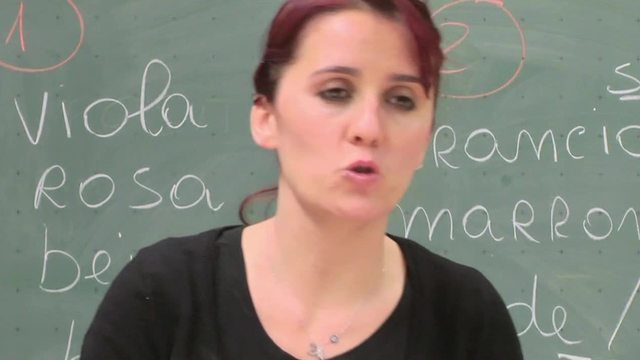 Finding Yourself with Trovarsi

When we look at a video about a place, the speaker often uses the verb trovare in its reflexive form trovarsi. Using trovarsi in this fashion might be hard to wrap our minds around, so let’s back up to the normal verb for a moment. Trovare means “to find” and is transitive, meaning it can take a direct object.

For her husband she found a brown belt.

We can use the verb with ourself as an object much as we do in English:

I'm not sure of myself at all, and I've never found myself in a situation like this, all right?

If Luca Manara spoke English, he’d probably say “I’ve never been in a situation like this before, OK?” He would have simply used the verb “to be.” But Italians often use trovarsi, so it’s a good verb to understand. Of course, if you do use the verb essere, people will understand you anyway menomale (luckily)!

But then it gets a bit more peculiar. Here is Arianna telling us where she is: where she finds herself. She wasn’t lost; she’s just giving us her location.

Instead of just saying: sono vicino alla stazione (I am near the station), she is referring to her geographical or physical position in that moment with trovarsi. It’s a little more specific than simply using the verb essere (to be).

In the previous example, trovarsi refers to a person, but trovarsi can also refer to an object, a place. English gets specific in a similar way by using “to be located,” “to be situated.”

When Marika plays the professoressa (teacher), she uses trovarsi to interrogate poor Anna. She just wants to know where Sardinia is.

Where is this region situated?

The port of Maratea is a tourist seaport. It's situated near the Aeolian Islands, Sicily, Capri, the... Sorrento.

It’s also very common to use trovarsi to describe feelings or conditions. This is a bit tricky.

Abito in campagna, e senza macchina, mi trovo in difficoltà.
I live in the country, and without a car, it's hard. I have trouble.

Non mi trovo bene con questo telefonino.
I don’t like this phone. I don’t feel comfortable with this phone.

Trovarsi can also be used reciprocally.

Ci troviamo da Letizia alle otto.
Let’s meet up [with each other] at Letizia’s place at eight.

The more you watch and listen to Italian, either on Yabla or in real life, the more you will notice trovarsi in all of its shadings. It’s a very popular verb!

Come ti trovi con Yabla (how are you managing with Yabla)? Facelo sapere (let us know) at newsletter@yabla.com.