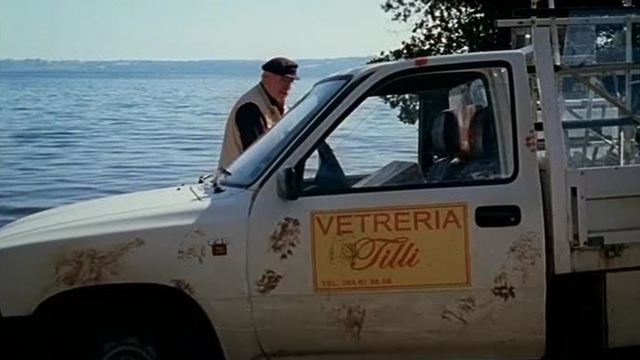 Dare: the Gift that Keeps on Giving

Dare is an extremely common verb. It basically means "to give." But it also gets used as a sort of catch-all.

We've seen it many times in its informal, imperative form, all by itself:

As we see, it doesn't mean "to give" in this case. It means something like "come on." As "come on," it has plenty of nuances.

Dai is often used as a filler, as part of an innocuous and fairly positive comment, and can mean something as generic as "OK." Let's keep in mind that va be' also means "OK!" Va be' is short for vabene (all right).

I'm sorry, Massimo, but we have to postpone our lunch. OK, then, if you have to go... we'll do it some other time.

Dai is also used to express surprise and/or skepticism. In this case, it is often preceded by ma (but). We see this in last week's segment of Commissario Manara, when Luca figures out that Marta might be the target of a shooting. She feigns skepticism.

And if by chance the target hadn't been Martini, but had been you? Me? Yeah, right!

In English we use the verb  "to have" when giving commands: "Have a seat," "Have a drink," "Have a look." In Italian, though, the verb avere (to have) is rarely used in these situations. And there isn't just one Italian verb that is used, so it may be practical to learn some of these expressions one by one.

We use the verb dare when asking someone to do something like check (dare una controllata), or have a look (dare un'occhiata).

Let's not forget the literal meaning of dare, which can easily end up in the informal imperative.

And what do you do, won't you give me a little kiss, Bubbù?

And to echo a recent lesson, and give another example of a verbo pronominale  (a phrasal verb using particelle or short pronoun-related particles) — this time with dare — we have darsela. We have the root verb dare (to give) plus se (to oneself, to themselves, to each other) and la (it). It's hard to come up with a generic translation, as it depends on the other words in the expression, but here are two different ones from Yabla videos. Maybe you can come up with other examples, and we will be glad to dare un'occhiata. The phrasal verb here is darsela a gambe (to beat it, or run away on one's legs).

It's that it's very difficult to find the right woman. In my opinion, if you find her, you'll high-tail it out of there.

Here's a colorful example from this week's episode of La Ladra:

Aldo Piacentini and, uh, uh, uh Barbara Ricci, anyway, the presumed lovers, who were really beating the crap out of each other.

The meaning of se le davano isn't very obvious, so let's try taking it apart. Se is a reciprocal indirect pronoun, "to each other"; le is the plural generic direct object pronoun, "them"; and dare, in this case, can stand for "to deliver". In English it might not mean much, but for Italians the meaning is quite clear.

We could say they are giving each other black eyes, if we want to use the original meaning of dare.

Di santa ragione adds emphasis or strength, and might be translated as "the holy crap," "the hell," or "really."

In case you haven't gotten the chance, check out this lesson about verbi pronominali.