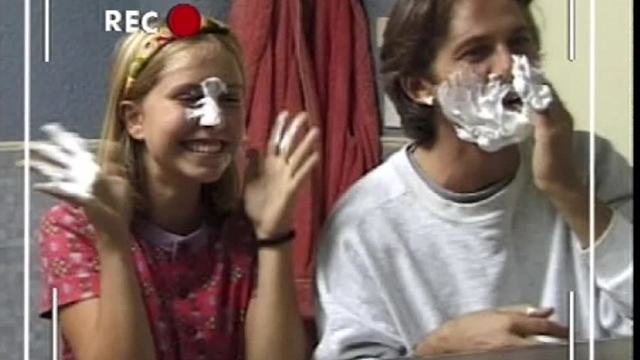 Catching up with Un medico in famiglia

Here is a riassunto (synopsis) of what happened in the story of Un medico in famiglia from when we left off after episode 2 of season 1, to the time in which we are able to pick up the story with season 3. But to round things out, let’s start at the very beginning and fill you in.

The main character, or rather the most famous actor in the series, is Lino Banfi who is now 84 years old. He is il nonno (the grandpa). His son is Gabriele Martini, known as Lele (we will add this to the nickname list). He's a doctor, hence the title Un medico in famiglia (a doctor in the family). At the beginning of the show, we discover that Lele’s wife had died, leaving him 3 children: Maria who is 13, Ciccio (nickname for Francesco), 10, and a not quite 3-year old, Annuccia (affectionate name for Anna).

Before Lele’s wife Elena died, they had already closed on a new house in a residential town called Poggio Fiorito, near Rome.

This is our old house. Now we are about to move to a new house.

The story begins as the Martini Family packs up and moves to their new home. The kids are definitely not thrilled to leave their friends and old school behind. Il nonno, who has recently retired from his job with the ferrovia (railroad) moves in with them to help out.

Lele is gone all day and Nonno Libero can’t manage by himself, and it soon becomes clear that the family needs someone to help out at home, specifically, una colf. Colf is is an acronym for collaboratrice famigliare (family collaborator or housekeeper).

Enter a “Polish” woman named Cettina. She is quite eccentric, but also a hard worker and manages to keep the household going, gradually becoming part of the family. She has a boyfriend, Giacinto, who is not very good at what he does, but he is a good guy. At the end of episode 2, the family, and we viewers discover that in fact, Cettina is not Polish at all, but Neapolitan. Once she has come out about this, things change for the better. She is still eccentric, but feels she can be herself.

In the first and second seasons, Elena’s sister Alice is a constant presence in the household. She’s played by Claudia Pandolfi, well-known to Italian TV and film audiences. She is la zia (the aunt) to the young kids.

Lele’s sister Nilde, played by popular Italian TV and movie actress, Anita Zagaria, is in a difficult marriage and her son Alberto, who is 16, goes to stay with the Martini family to benefit from their supposedly more harmonious home environment.

There’s drama at home, but there is also the daily drama at work, where Lele is head of the ASL, the local health center. ASL stands for Azienda Sanitaria Locale.

There are various characters within the walls of Lele’s workplace, notably his colleague Laura, hopelessly in love with him. Little by little, Lele realizes that the person who means the most to him, on a sentimental level, is Alice, his late wife’s sister. She, however, already has a boyfriend. His name is Sergio and he has been away for a while. When he comes back, Sergio and Alice get engaged. But at the bachelor party before the wedding, Sergio gets drunk and beats her. She calls off the wedding and leaves him. In the season finale, Lele declares his love for her.

The second season opens with Lele waiting anxiously for Alice's return a trip she took to Africa. The two have to figure out if they want to commit, and they decide to share the news of their relationship with the family. Though Alice is jealous of Lele’s old flame, Clara, a photographer, their relationship grows. Of course, Alice is also hesitant about taking the place of her sister, Elena.

In the end, Lele and Alice decide to get married. About to leave on their honeymoon, Alice has a miscarriage and is told by the doctors that she will no longer be able to have children. Nilde, Lele’s sister, also gets pregnant, and while in Sanremo, gives birth to a mulatto child, a little boy, whose father is unknown to the Martini family. She names the child Lele Junior after her brother.

There is no lack of trouble at the Martini household: Alice is persecuted by a maniac admirer; Alberto falls into depression after a dramatic road accident where his dearest friend (Adriano) remains paralyzed; Cettina and Giacinto don’t get along like before.

Alberto comes out of his depression when he meets Gemma and the two become an item.

By the end of season 2, Alice, despite the earlier diagnosis, has become pregnant with Lele’s child. At the “wrong” moment, she finds herself stuck in an elevator, ready to give birth. Cettina and Maria have to help her give birth — to twins! This momentous experience brings Maria to an important decision she had been agonizing over: to study medicine and specialize in obstetrics.

This brings us to Season 3, available on Yabla. 3 years have passed since Season 2 and Maria is starting medical school, Lele has just left for a sabbatical in Australia to research a rare infantile disease, and has taken the twins with him. Alice will join him from Brazil. Nonno has his hands full with Nilde’s little boy, Lele Junior, and the other kids who all have their own problems. Let’s see what happens!