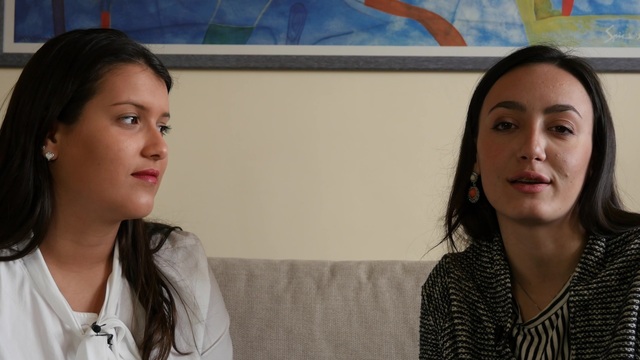 In learning a new language, when we are able to latch onto parallels with our own language, it can be comforting, but sometimes we have to let go and realize things work differently in the new one. That is the case with il passato prossimo. It has a name that makes us think that this tense is about a past that isn't very far away, because prossimo (with its cognate "proximate") does mean "near," "next," "close," etc.).

So when we learn that we use this tense to express things that have happened in the past and are already finished (as we use the simple past in English), it doesn't necessarily make sense. But let's look at it from another point of view. Let's look at it relatively. Because, although you can mostly get away with not using it, there is another past tense in Italian called il passato remoto. Here, too, we can detect the cognate remoto meaning "remote" or "far away." This is a simple tense in which the verb itself is conjugated. In general, it is used to express finished actions happening in the past that don't have any effect on the present. It means that there is a clear chronological and psychological distance between the fact expressed with the Passato Remoto and the present.

The passato prossimo is a compound tense that takes an auxiliary verb (avere  or essere) and a past participle, but in a way, it is easier to use because we don't have to remember how to conjugate the verbs in the passato remoto. People will understand us and that's the most important thing. In addition to this, it's not always easy to know when to use the passato remoto. There are some grey areas.

The name "passato prossimo" refers to an action's place on a timeline. The name "present perfect," on the other hand, deals with the tense of the auxiliary verb we use ("to have" is used in the present tense in the present perfect). In the past perfect, the auxiliary verb is in the past tense. So the naming of the tenses has two different parameters, not to be compared.

The passato prossimo can express past actions that are over and done with (as the simple past does in English). But can also coincide with the present perfect in some instances.

To get an idea about when we use certain tenses, let's take a look at this video where two young women talk about their friendship. They talk about the past when they were in secondary school. They use the passato prossimo even though they are clearly talking about a time when they were younger.

And then, after graduation, we decided to leave on our own with six other kids from the class and we went to Malta.

As we mentioned above, sometimes the passato prossimo does coincide with the present perfect, as in this comment about their continuing friendship. Note that there is an adverb of frequency.

But here, in the following example, they use the present tense to express what in English, we would express using the present perfect. Note the use of da (since, for).

The above use of the present tense in Italian to express a "present perfect" situation is perhaps one of the trickiest tense differences to wrap our heads around. And it's just as tricky for Italians trying to speak English!

The two young women go on with the present perfect to talk about the past. Here, we find fa (ago), putting the action clearly in the past.

We met, in fact, six years ago, on the first day of school.

If you are a subscriber it might be useful to watch the entire video to get a better feel for how the tenses are used. Looking at the transcript can help, too. 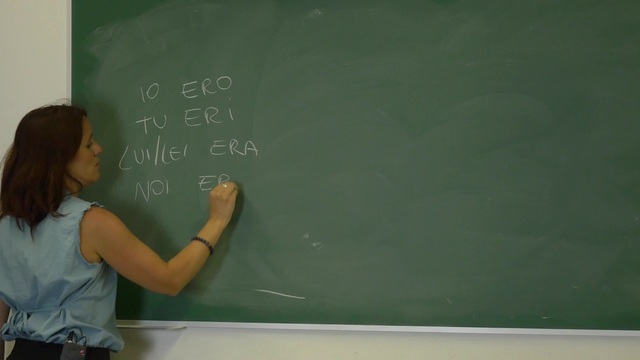 How to Tell a Story in Italian, Part 2

In a lesson with Daniela, we learn another way to set the scene of a story. We talked about using the presente (present simple) and passato prossimo (present perfect) in a previous lesson. Now we’ll talk about using the imperfetto (imperfect tense) to set the scene in the past without specifying the duration or pinpointing the moment in time of an action. We use the imperfetto to describe the characteristics of something in the past.

So, the imperfect is used to describe landscapes, weather, features of a person or a thing in the past.

In the following example, Lara, from the popular Commissario Manara TV series, is talking to an old classmate whom she met up with by chance. They are telling each other about their past feelings.

This is how she felt when she was younger:

And this is how her friend Massimo felt about her!

I was crazy in love with you!

The following example describes an ongoing condition in the past.

At school, I always had problems with math.

The following example is interesting because we see the passato prossimo (siamo visti /we saw) used when pinpointing the moment (l’ultima volta / the last time). Still, the imperfetto (eravamo / were) sets the scene.

But you know where we were the last time we saw each other?

We were at the port of Istanbul.

For how to form the imperfetto, please see Daniela’s previous lesson.

Practice: Try setting the scene in the past using the verbs Daniela talks about in the lesson, and other verbs you know. If you’re not sure how to form the imperfetto of the verb you wish to use, look it up in an online dictionary such as WordReference. Think about the place, how old the person was, what the person looked like, and what the person was wearing. How did the person feel?

Here’s something to get you started.

When I was young and was going to school, I played flute in the school orchestra. I liked it a lot. I went to school by bus every morning. It took me about twenty-five minutes to get to school. It wasn’t a very happy time for me. I didn’t study enough so I was always afraid of being called on to answer the teacher’s questions. I much preferred hanging out in the music room to study flute. I also sang in the choir. The director was excellent and everyone loved her.

Of course, when we tell a story, we like to mix the tenses up to create interest and tension, but for now, let’s try to get to where we feel comfortable using the imperfetto and know more or less when and how to use it.

How to Tell a Story in Italian, Part 1

Using tenses correctly in a new language is usually somewhat of a challenge. Let's talk about two tenses — presente indicativo (present simple) and passato prossimo (present perfect) — that we can use to set the scene in a story, or to establish a timeframe, and the signpost words that can help us figure out which tense to use.

Here's what causes some confusion. Italian commonly uses the passato prossimo (present perfect), that is, the tense using the auxialiary verb "to have" plus the past participle, to refer to things that happened at a particular moment in the past, for which in English we use the simple past tense. This is hard to assimilate, because English uses the present perfect for events that are still going on, or still true. In addition to that, in cases where English does use the present perfect, Italian often uses the present simple. It's easy to get mixed up, but it should become clearer as we go along.

In a new video this week, Erica and Martina speak very simply about their friendship and how it developed. This is an excellent opportunity to zoom in on the passato prossimo, since they use it a lot, and to get a feel for how it’s employed in everyday storytelling. Maybe you can tell a story of your own, using the same outline.

But let's zoom out for a moment. Before telling a story, we often need to set the scene and establish a timeframe. Erica first uses the present simple, and adds da (from, since). This formula takes some getting used to, so it's a good idea to practice. Notice that the translation employs the present perfect.

Here's another example of how the present tense is used to establish a timeframe that includes the past.

This statue has been here for at least fifty years.

We can use this setup with verbs like conoscere (to be acquainted with), frequentare (to hang out with, to frequent), essere colleghi (to be co-workers), lavorare insieme (to work together),essere sposato (to be married), vivere in un posto (to live in a place).

Practice: Set the scene for a story. Establish the timeframe including the past up to the present with the simple present tense plus da (from, since), using the above-mentioned verbs, or other verbs you think of. You'll be answering the question: da quanto tempo (for how long)?

Another way to set the scene is to find the starting point in the past. We use the passatoprossimo for that, plus the short adverb fa (ago) that signals the past.

So in the featured video, Erica continues setting the scene, telling us when the two friends met. Here she uses the passato prossimo. In English, we’d use the past simple, of course. Erica is essentially saying the same thing she said in caption 3, but she’s pinpointing the moment, not a period of time. Note: Since the friends are female in this case, the ending of the past participle conosciuto is feminine and plural. If it were two guys, or a guy and a girl, what do you think the ending would be?

We met, in fact, six years ago.

When you meet someone for the first time, it’s unique: one instant. So you use the passato prossimo.

Learn more about the verb conoscere (to be acquainted with, to make the acquaintance of) in this lesson.

His son, seventeen years old, published his first article in an American newspaper a few days ago.

Practice: Experiment establishing a timeframe using the presente plus da (from, since) as you did in the first exercise, and then saying much the same thing in a different way, pinpointing a moment in time with the passato prossimo and fa (ago). You'll be answering the question: quando (when)? or quanto tempo fa (how long ago)?.

Here’s a quick example to get started:

As Erica and Martina continue their story, they use the passato prossimo to describe events in the past. You can do this too!

Hint: Why not use the transcript of this video? Just click on "transcript" underneath the video thumbnail (or in the pop-up menu "more" in the new layout). You can view it in just Italian, just English, or both. You can copy and paste it into a blank document. You can make it printer friendly. In somma (in short), it's pretty handy!

There are other ways to set the scene, and other tenses to use, but we’ll get to those in another lesson.