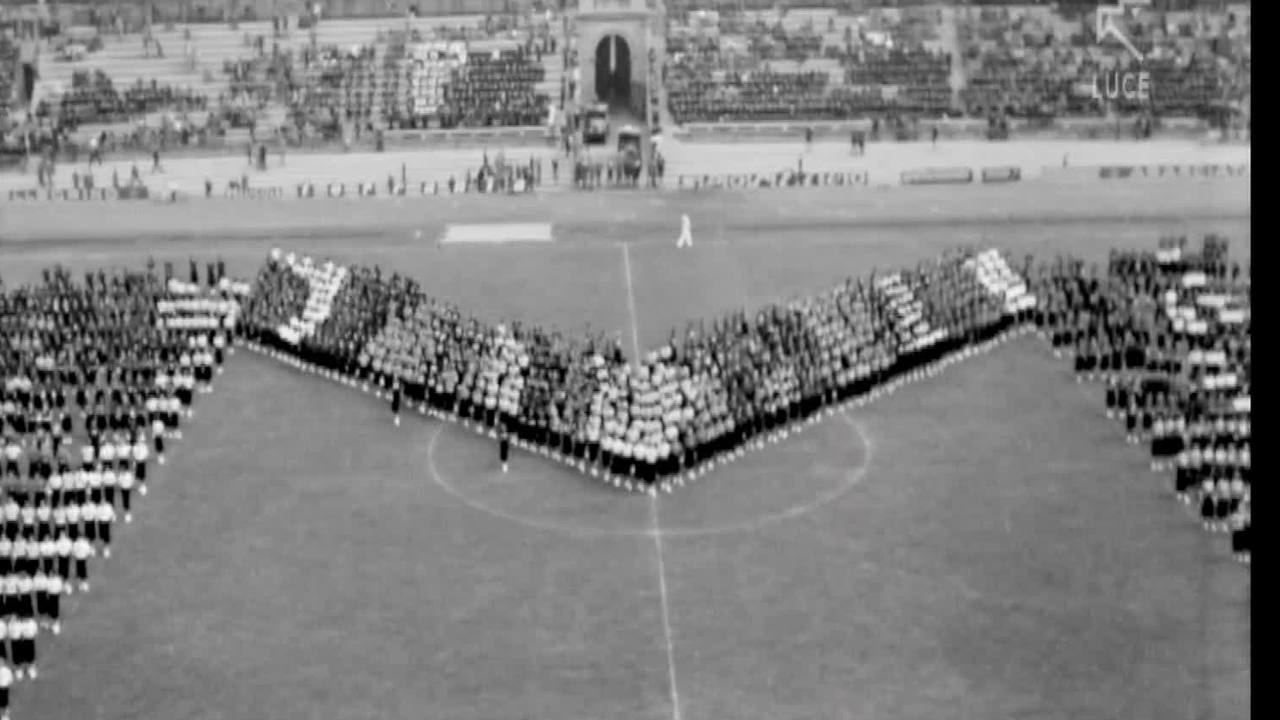 A fascinating documentary ​on fascist Italy's attempts to banish minority languages and dialects, prohibit the use of foreign words, oblige Italians to use the personal pronoun Voi rather than Lei. Footage produced by the Luce Institute [L'Unione Cinematografica Educativa, (The Educational Film Union)] includes propaganda films and chilling speeches delivered by Mussolini.

Me Ne Frego [I don't give a damn], was one of the mottoes of Fascism, coming originally from the writings of Gabriele d'Annunzio and employed by storm troops during World War One as a war cry for courage and daring, with the meaning, "I don't mind dying for freedom." The motto gives the title to this documentary about the influences of Italian Fascism on the Italian language. It was produced by the Istituto Luce Cinecittà, with materials from the historical Luce archives, and narrates the obscure attempt by the Fascist regime to create a new and unique language, a new “Italian” that fit the dogma of the dictatorship.

Mussolini forbade the use of dialects and the minority languages that were spoken in the regions bordering the countries to the north in favor of one language for all. Italians were bombarded by fascist propaganda and Mussolini's very frequent speeches.

In World War I, Italians who up until then had spoken their regional dialects, found themselves fighting side by side against a common enemy. But Mussolini was interested in fighting the internal enemy.

The segment looks at how Mussolini patterned his fiercely nationalist rhetoric after poet Gabriele D'Annunzio, while harkening back to the glory of Imperial Rome. The song in the segment refers to Balilla, an 18th century Genoese boy. In 1746, Balilla threw a stone at an Austrian official of the occupying Hapsburg Empire, which led to the War of the Austrian Succession.

A great deal of effort went into purging foreign words from the Italian language under the fascist regime. Newspapers, magazines, and book publishers were at the forefront of the effort and were tasked with finding Italian replacements for foreign words and expressions. Many fascist-era terms have fallen by the wayside, but some succeeded and are still in use today. As an example, the word manifesto [poster] was successfully introduced to replace the French term affiche.

Mussolini continues to get rid of any traces of foreign words, and even mounts an exhibit against the use of the common formal second person singular address "Lei" (you) in favor of "Voi." See this lesson about "Voi" to get some background.

We can see that the battle against using "Lei," the common, formal, second-person form of address, was taken very seriously by the fascists. In fact they went too far when it came to a popular women's magazine called "Lei" (she, her).

Soon after the introduction of talkies, dubbing came about in the thirties. Dubbing was extremely popular in Italy and remains so today.

Schools in fascist Italy banned the study of dialects and moved to using standardized textbooks. The fascist hymn “Viva Adua nostra” refers to a battle won by the Kingdom of Italy in 1896 near Adwa, Ethiopia.

This segment opens with a sort of poem, demonstrating how kids growing up in fascist Italy were expected to behave. Minority groups had a pretty hard time, too.

Mussolini inveighs against the middle class, saying that it is the enemy of fascism. Much of the footage in this segment features EUR, the Rome district that was built in the 30s and 40s.

The segment looks at the Royal Academy of Italy's dictionary of Italian, which was filled with quotes from Mussolini. By the end of World War II, the dictionary had gotten to the letter “C.”

After the war came TV. It changed everything, and provided a new way to unify the Italian language and teach people reading and writing.

The narrator goes over the vanishingly small number of expressions coined during Mussolini's time that are still in use today. The song that gives the series its name is provided in full.